Call Us Now
Request a Quote
Log In
Review Us

How to Get Rid of Fire Ants

Fire ants are aptly named. Though they are small, they are fierce, and their bites cause a great deal of pain and even severe allergic reactions in some cases. Their activity can even damage structures like utility equipment. Knowing how fire ants operate and how to identify them is the first step in treating the problem. Keep reading to learn how to get rid of fire ants on your property. 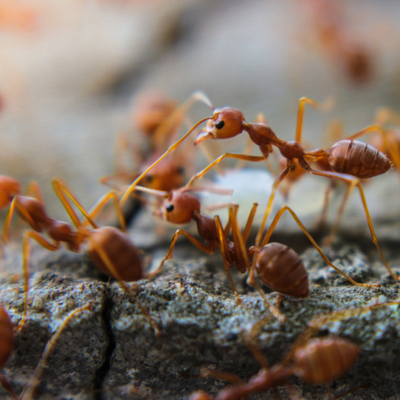 Interestingly, fire ants are not native to Texas. However, they have increasingly become a problem for Texans and the southwest US as a whole. Like many invasive species, fire ants have accidentally been introduced to the US around 100 years ago. They are similar in appearance to native ants; however, far more aggressive when disturbed. 1/16 to 1/4 inch in size, fire ants are red and black in color. They’re smaller than Leafcutter or Harvester Ants. Not only do they wreak havoc on lawns, but they also cause health problems for people and pets and destroy property.

Fire ants bites are excruciating and cause white pustules that appear on the skin and last anywhere for 24 hours. In some cases, they can cause allergic reactions. If you’ve been bitten, keep an eye on the sight and contact a medical professional.

As with most ant species, fire ants live underground in a series of complex caves and tunnels. You may not even be aware you have a problem until you notice the fire ant mound. This structure resembles the small ant hills you might find on the cracks in the sidewalk. Except this structure is much harder to ignore – especially when it’s in the middle of your lawn. The worker ants create these mounds as they dig out their tunnels. Once you’ve spotted a mound, you should take control measures immediately. Mounds indicate a well-established colony that’s likely been around for months, and the bigger the mound, the bigger the colony beneath it. Fire ants are extremely protective of these mounds. Any disturbances from lawnmowers, children, or pets could be enough to send them on the attack.

There are two ways to treat fire ants, but you should know that it’s impossible to eradicate them. Being so small and living underground, it’s impossible to know exactly where every fire ant colony is hidden. However, pest control programs will suppress fire ant activity using biological methods. When it’s reasonable and safe to do so, an insecticide may also be applied to stop the spread of fire ants. The most important thing is to kill the queen. Without her, the colony can’t produce more ants and rebuild. 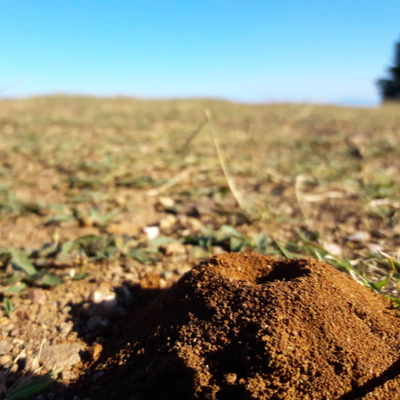 As the name suggests, this treatment involves treating the mound once you’ve discovered it in your yard. The bait is powderized, sometimes called “dust,” and is sprinkled over the mound(s). The poison coats grains, which encourages the ants to eat them. Unlike insecticide sprays, the poison will not kill ants right away. It works slowly on purpose, so ants live long enough to bring it back to the queen. This type of treatment is good if you have one isolated mound, but it won’t prevent other colonies from popping up. So, you may need additional fire ant control in the form of insecticides.

Insecticide treatments, also known as “contact insecticide,” are applied to the surface of your landscaping. Like poison, these products are slow releasing, but their effects will last for a while. Unlike poisonous mound treatments, this spray may not reach ants deep inside the colony. However, it will eradicate ants on the surface. Using this in combination with a mound treatment is the surest way to eliminate a fire ant infestation.

There are several means of natural fire ant control, though they aren’t as effective as the methods mentioned above. Pouring approximately three gallons of boiling water into a mound will kill about 60% of ants. Some people resort to pouring dangerous chemicals, like petroleum, into the mound, but this is highly discouraged. You may kill the ants, but you’ll also damage the soil, your yard and expose yourself to chemicals. Other common home remedies for fire ants include baking soda, cinnamon, club soda, coffee grounds, grits, and molasses – and none of these have been shown to have any substantial effect on fire ant mounds.

Don’t let fire ants ruin your yard. Take back control with the help of the professionals at Lawns-4-U. Our fire ant control services deliver swift, effective treatment – guaranteed for a full year. Give us a call at 972-859-0658 or contact us online to schedule an appointment! For more lawn care tips and information, be sure to check out our monthly blog.